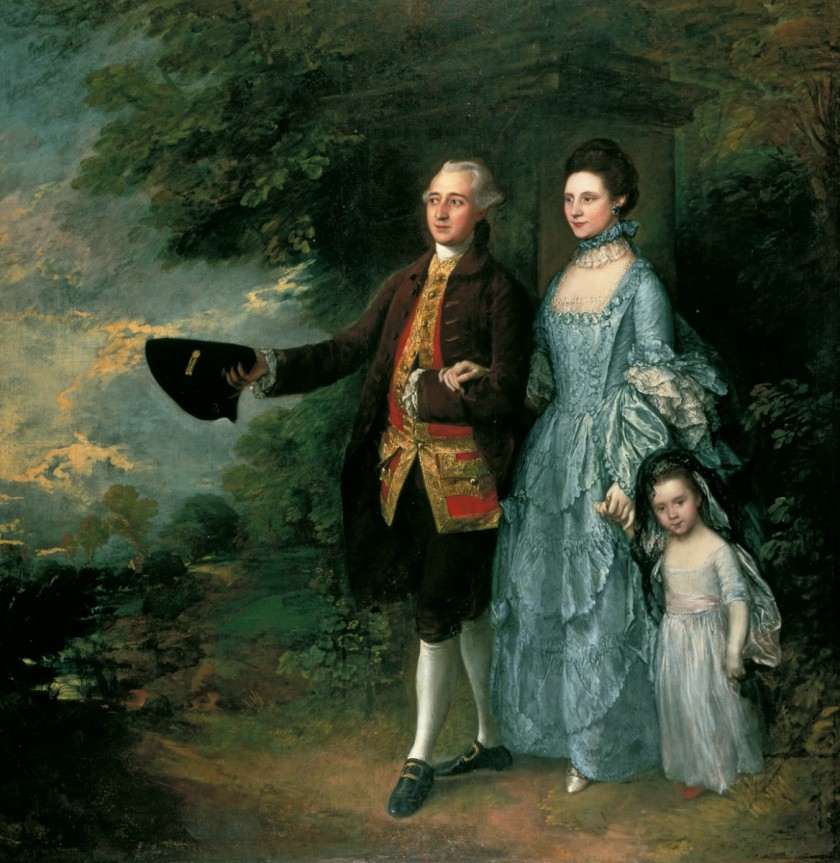 This article analyses five paintings from 1751-1905. Each work is a portrait of wealthy patron/s in gardens or on their land. Employing ideas about ideology drawn from the nineteenth century German philosopher Karl Marx (1818–1883), and French philosophers Louis Althusser (1918-1990) and Michel Foucault (1926–1984), this article considers how the viewer has been positioned in relation to garden portraits commissioned by wealthy patrons.

The first image setting the tone is The James Family (c.1751) by Arthur Devis (1711–1787). Robert James was secretary of the East India Company. Material wealth and worldly success is at the root of this work as the family preside over what could be their estate. Berger’s expression of Gainsborough’s Mr and Mrs Andrews is  apt here, “theirs is private land…and their proprietary attitude towards what surrounds them is visible in their stance and expressions”.[1]

Marxist theory places the economy at the base of society, comprising the production of goods by labour, and a superstructure, reinforcing the base, comprising social institutions: arts; religion and civil law.[2]For Marx, the principles of property ownership and civil law are illusory. Existing property relationships are declared to be the result of the general will.[3] Its inclusion in the principles of the dominant legal system of the time coincides with the emergence of the bourgeoisie. The law supports class interests, which for Marx, overthrows the feudal principle that authority is held in the hands of the few, and the right to property is provisional on peoples’ position in social hierarchies.[4] The James Family exercise socio-economic power, suggesting the landscape beyond is their property, promoting land ownership. The painting becomes an instrument of possession serving the ideological interests of the ruling class, positioning viewers as witness to their authority. Ideology in this sense represents the social difference between unequal social groups.[5]

To protect its interests and possession of power, ruling classes developed ‘false and distorting sets of ideas where reality is presented by those who have  vested interests in resisting radical change.’[6] Referred to as the false consciousness of individuals, this condition may beset both owners and workers, meaning they view their relationship as the only one possible: the truth and natural state of economic and social affairs. In Gainsborough’s, The Gravenor Family (c.1752-4), Ipswich politician and apothecary, James Gravenor, presents to viewers a relationship where beholders are alienated from the power of the bourgeoisie. However, this truth relies upon viewers recognising the relationship, without which, later Marxist scholars argue, there can be no truth independent of the subject.[7]

Art seems to have a character that purports to state truths. Similar to Marxist ideology, this character serves the interests of one class in opposition to another by instilling certain psychological conditions in its viewers.[8] The selective focus of the works is upon the patrons, thereby necessitating the neglect of viewers. This reinforces the patrons ruling class role, furthering class conflict.

The focus on patrons and their property encourages embedded accepted beliefs on recipients that the sitter is superior. The sitter is positioned against the second focus which is the landscape. Fields, forests etc. can be seen as natural instruments of production. Viewers are additionally subservient to nature. Property therefore appears as direct natural domination, and as domination of accumulated labour capital.[9] The image/viewer relationship holds an exchange between patrons and viewers firstly, and nature and viewers secondly. The image causes an aberration in viewers where the display of property, wealth and capital can simultaneously alienate viewers while reinforcing the acceptance of class norms and practices.

Although Althusser evaluated descriptions of the world as true or false, he did not believe this to be the same with ideology and was not persuaded by binary ideas of false consciousness.[10] Althusser adopted a broader sense of ideology than Marx. He alludes to our unconscious relationships as social subjects in a social world, where this relationship authors ideas of selfhood. In Gainsborough’s, The Byam Family (c.1762 – 1766) viewers misrecognise themselves as subjects. Viewers are in the company of the family, evidenced by lines of perspective from the stone feature and the stare of the daughter, which both point to, and then draw viewers to behold the sitters. For Althusser, viewers are immediately asked to assess their own socio-economic class in relation to the sitters. Cultural hegemony is the principle enjoyed by the ruling class to dominate subordinates, convincing them that their social standing is right and just.

Althusser argued that two institutional systems of domination exist to reproduce capitalist exploitation. Repressive State Apparatuses (RSAs) differ from Ideological State Apparatuses (ISAs) in that they maintain rule by force. Police, and military operate to maintain capitalist class structures. ISAs operate less by force and more by coercive ideology, encouraging individuals to imagine and accept their place and relationships with society, achieved through education, media and religion. Althusser saw art and culture as a continuing Ideological ISA that used ideology to shape our self-image as subject.

Reinforcing class norms is linked to the formation of subjectivity and ISAs.  As a structuralist, Althusser believed the study of culture required a more rigorous scientific approach than that provided by historicism. Indeed, art has an aesthetic power and an ability to shape our responses to the present, not just our ideas of particular histories.[11] In contradiction, art is an ISA in the private domain because it does not possess public status, but it exercises bourgeois authority. Because the state is the state of the ruling class, private institutions function perfectly well as ISAs. Ideology plays roles in the reception of art works where ideology is a ‘representation of the imaginary relationship of individuals to their real condition of existence’.[12] The viewers imagines they have agency when engaging with the art ISA, but this agency is purely an illusion and is a construction meant to reinforce the capitalist agenda.

The imaginary relationship is further solidified by art’s power to call upon viewers as a subjects, interpellated by ideology. Madame Bergeret (c.1766) by the French artist Francois Boucher (1703–1770) shows a young woman standing in a misty garden in opulent satin gowns surrounded by blooming flowers, wearing pearls. The portrait pre-dates the start of the French revolution by over 20 years. She looks left, ignoring viewers while her bodice, the bench and perspective call viewers to look into the scene, placing beholders not just as subjects, but apparently freely chosen by the viewers to become subjects. However, through the process of interpellation, beholders are presented with identities, which the image calls on viewers to accept through systems of social interaction with the image. For Althusser, the image may be a system of representations; images and concepts, a structured discourse that shapes and constitutes the subject.[13]

Foucault was also influenced by, and reacted to, structuralisms rationality. He was concerned that all social actions were determined and constructed by the limitations of language, which determines knowledge.[14] For Foucault, ideas and knowledge are created by discursive events that offers a framework for fixed ideas of how knowledge is accepted. He links this power with oppression and practices which subordinate the individual. Here, Foucault aligns with Althusser where both see subjects as constructed. However, Foucault has reservations about ideology, specifically about Marxist notions of base and superstructure, and of power being in the hands of the ruling class. Instead power is something that is omnipresent and circulates, not as commodity, private or otherwise, like a cultural object, but instead from within the social body.[15]

John Singer Sargent’s (1856 – 1925) 1905 portrait, Hylda, Almina and Conway, Children of Asher Wertheimer references aristocratic fashioning of the elite classes seen in the other works. Positioned on a terrace, it is painted in the style of the grand manner. On first inspection, the sitters stare invites the viewer to respect their wealth, and positions viewers as firstly choosing and then accepting the position as subjects. Displaying the signs of aristocratic status: the dog and riding crop is evidence of social fashioning. The techniques they apply to themselves, the relation to themselves as a choice within a field of possible selves resonates more closely with Foucault’s analysis of ideology. Viewers and sitters mutually influence each other where the power relation is reversable. The beholders then exercise agency in shaping their own ideology. The subordinates, or viewers then engage in a potentially reciprocal power relation with an ability to block domination, reversing power.[16]

This article creates links between three key thinkers on ideology, applying their observations to a range of images that purport to show the wealthy and ruling class. It has shown that conceptions of ideology and the position of the viewer change over time between the mid nineteenth century and the post-modern ideas of Foucault.  Analysising these works as social objects, contextualises production and consumption, thereby exposing ideological presuppositions on the part of both artist and beholder. Theories which are preoccupied with judging works by reference to their representational skills, expressiveness, formal aspects or provision of aesthetic experience are demonstrated to be deficient in important ways, failing to disclose ideological tensions and contradictions.